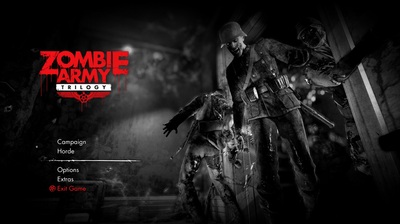 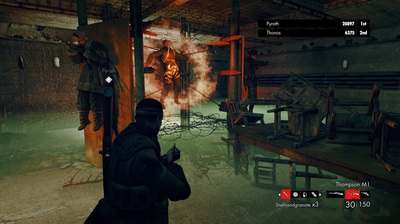 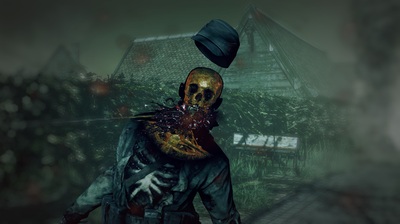 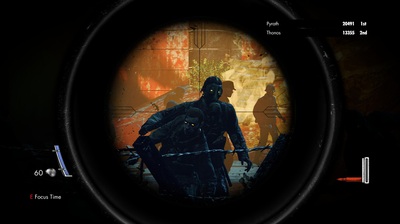 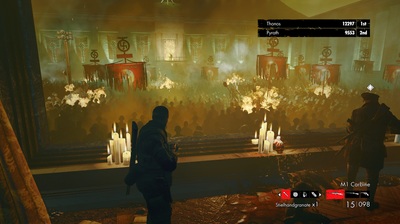 For those who never played Nazi Zombie army 1 or 2, the game revolves around the end of World War 2 where Germany is on the brink of defeat and Hitler decides to execute Plan Z, which basically creates an army of zombies.  The players goal in the first game was to get to Berlin and escape.  The second game had you go back to Berlin to stop the zombie threat. The new third chapter has you putting a final end to the zombie plague by defeating Hitler.  The story pushes the game along, but it is hardly a selling point for the game.

Each mission starts with you selecting your weapon load out which consists of a primary sniper rifle, a secondary machine gun/shotgun and a handgun.  The selection here is pretty good, each gun has its pros and cons, its really up to the player which guns they want to use.  You also get to choose how many starting grenades and other explosives you get.  As you progress through the level, you will find safe rooms where you  can swap out your weapons so you can change your load out if you are not satisfied with what you have.  Certain points during the game give you access to on or two powerful weapons, however you lose them at the start of a new level and there ammo is usually limited.

Game play here is pretty straight forward.  You progress through each level until you get to a siege point where you have to hold your ground from a wave of zombies, then find a safe house, rinse and repeat until the end.  Level designs good, however after awhile I found everything starting to look the same until near the end of chapter 3.  Pacing is also good with each level taking my brother and I between 30-50 minutes to complete.  3 game chapters with 5 levels a piece took us about 14 hours to complete, and that was with us dying a lot in chapter 3.

Combat in the game was the best part for me.  Using a sniper rifle to shoot a zombie in the head and watching it explode never got boring for me.  Using machine guns or the shotgun is good but inaccurate unless used in short bursts and handguns are good for conserving ammo if the enemy is up close.  Using grenades and setting trip wires helps when you are in a siege situation and I always enjoyed seeing a group of zombies get blown to pieces.  Most of the enemies you fight are normal zombies, however you also go against other enemies like skeletons, bomb runners and some elite zombies that take a few head shots to beat.  As a whole I found combat to be fluid and if I was missing my shots I never thought it was due to poor mechanics.

The X Ray Kill Cam is here and while I can see how this can get repetitive to see after awhile, I never got that feeling.  Seeing a slow motion bullet go through a zombie's chest shredding its insides was fun.  Zombie Trilogy also added a dismemberment system to the game where aiming for a arm or leg can shot that limb off.  Personally I found no real use for this since most enemies go down with a head shot.  But shooting off the leg of a zombie makes it crawl towards you and shooting off an arm looks neat.  Again its a functional system but not every useful.

Zombie Trilogy's sounds and music fit in very well with the game setting.  The music score sounds ominous and the sounds effects from the zombies to the weapons fell like a good fit.  The graphics for the first to games have been remastered and I could tell right away how much better they looked.  The character textures looked more vibrant, environments looked sharper, and the blood effects looked more real.  One thing in particular I liked was the lighting and shadow effects in this game.  If you have already beaten the first two games, it is worth your time to go through again to see the new graphic changes. 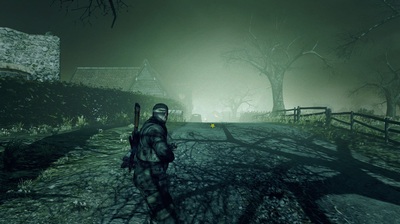 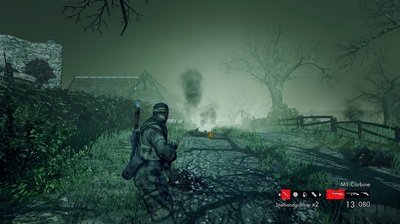 The game is fun to play solo but it was designed to played with others.  The game supports up to 4 players and one thing I liked was the game scaled the number of zombies based off of how many players are in the game (you can also manually set this at the creation of the game).  Working together with your teammates to survive a siege was a blast and probably the highlight of the game for me.  The new Horde mode lets you pick from 5 different stages and is a wave based siege mode.  While I felt they could have added more stages, I think this was a great addition since sieges are a fun part of the game and this lets you do them without having to run through levels to get to them.

While I feel this game has a lot of good points, there are some neutral and not so good ones.  They added 4 females characters to the game, which is great, however all 8 characters play them same and are basically just skins.  Making it so certain characters did better with certain weapons would have been a nice change.  If they do play differently I never noticed.  Also the game is repetitive after a while, which might bother some people.  Mostly, if you are not a fan of the sniper elite games and/or didn't like the first two games, you are probably not going to like this one.

Overall the changes they made to the game are noticeable and for the good.  Graphically the game looks better and warrants a replaying of the first two games.  The new characters and horde mode add more variety to the game.  Playing online with friends is still as fun as it was with the first two games.  A fan of the series should pick this up, if you never played a game in the series before but were interested now is a great time to jump in.  Someone you didn't like the series probably would not be interested and reading this review anyway.