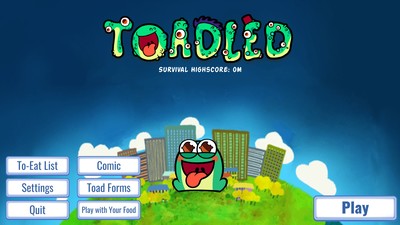 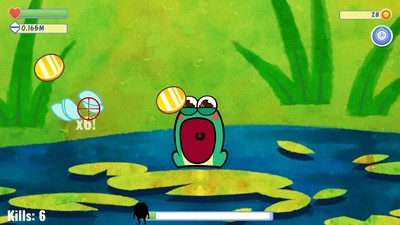 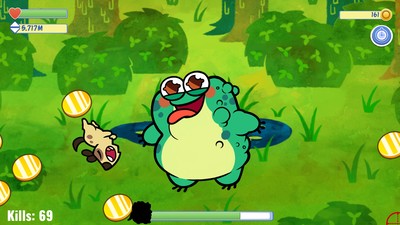 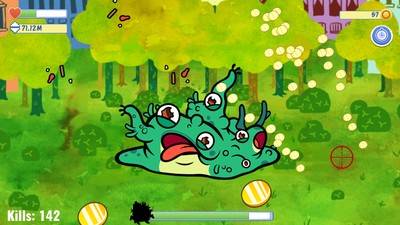 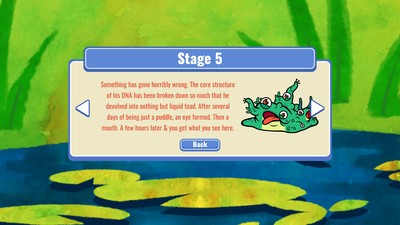 Sometimes simple games are the best.  No story, no advanced mechanics, and just simple, straight-up gameplay.  While this is the category that Toadled falls into, that does not make this a dull game.  It also doesn’t make it a great one, either.

This game does not have any real story to it.  You play as a toad that eats everything in its sight.  The more you eat, the bigger you get, and once you reach a certain point in eating, you go to the next stage and start the process over again.  In between stages, you get a little dialog explaining what is happening to your toad character. You also can unlock comic pages while playing each stage that also try to advance the story visually.  Each stage has a goal that has to be reached in order for the comic page to unlock, and these goals can be viewed from the main screen.

At its core, this is a point-and-click game.  You see an enemy, click on the enemy, and if your tongue hits the enemy, you eat it, increasing the fill bar.  If an enemy hits you, you lose health and your fill bar resets to zero. Lose enough health and you lose. Bombs also show up on screen, and while they won’t hit you, you will lose immediately if you eat them.  There is also a slo-mo feature that slows everything around you down for a small amount of time while turning the screen red and enemies black.

Coins also appear on the screen that can be collected just by touching them with the mouse cursor.  These coins can be used to purchase upgrades like more health, less bombs, faster fill gauge, etc. You can upgrade abilities anytime during a playthrough or after you lose.  These upgrades do have a noticeable impact on the gameplay.

The graphics for this game are simple, but not bad.  I liked the character and enemy sprites, although I found the stage backgrounds slightly bland.  I thought the comic strips were well done, and while not long, it did a good job conveying what little story this game has.  Sound and music were decent, but nothing that really stood out.

I had two issues with this game.  The first is that the game does not provide any real challenge.  While I enjoyed the point and click gameplay, the game can be completed fairly quickly and with minimal effort.  My other concern is that once you beat the game, there is no reason to play it again unless you want to try for a new high score or unlock all of the game achievements, and as far as getting all the achievements in the game, that can be done in as little as two hours.

This is a fun point-and-click-style game.  It is a simple concept, easy to play, and is something that will keep you busy for an hour or two.  However, this is a game that will not give you a challenge and provides little reason to come back after you beat it.