The Typing of the Dead:  Overkill (PC) Review 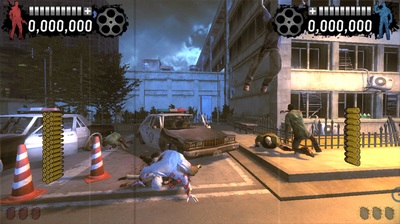 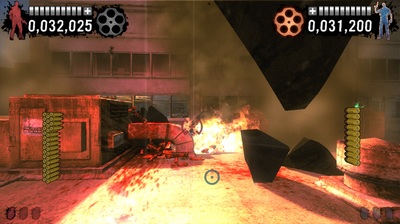 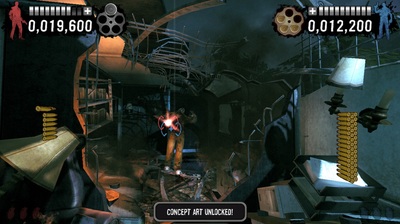 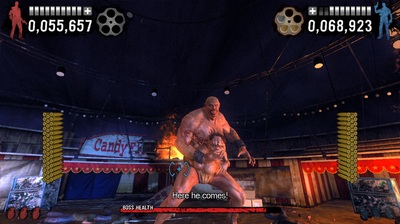 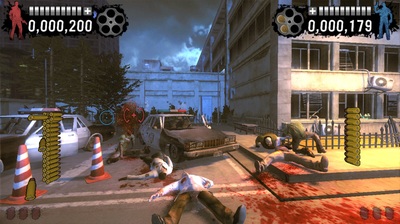 Review
by Thonos
4/11/2015
​
REVIEW NOTE:  The review was done while playing the game in Multiplayer mode.

House of the Dead is one of my favorite arcade games.  While I am a fan of light gun and on-rail shooter games, I always enjoyed the setting and game play of the series.   So when I saw there was a PC House of the Dead game on Steam, I was very excited to try it out.  The Typing of the Dead Overkill is a modified version of House of the Dead extended cut for the Playstation 3.  The game replaces the shooting mechanic of the game and instead has you type words and phrases to kill zombies/mutants.  While I wasn't thrilled with the typing mechanic, it was the other modes that got me to enjoy the game.

The game revolves around two main characters, Agent G who is in the area investigating an outbreak and Issac Washington a local detective who is out to get revenge on the local crime lord Papa Caesar for the death of his father.  While Agent G is the by the book, no nosense type of the guy, Washington is the comical, constantly cursing shoot first ask later character.  While this type of pairing of characters isn't uncommon, it works very well for this type of game.  While going through the games nine levels, you also meet Varla Guns, stripper and sister to another of the games character and Candi Stryper, love interest of Varla's brother.  I don't want to cover too much of the story since I feel that while its not the greatest, it was still worth exploring especially for the ending.

The game has a very grind house feel to it and that is very evident in its story and presentation.  The games graphics are not bad by no means, they work well for the setting of the game.  If you are looking for ultra realistic graphics look elsewhere.  The audio in the game I felt was great and helped make the game more enjoyable.  While the sound effects and music are good and again felt right fir the game's setting, the voice acting was what I truley enjoyed.  The dialog between characters was comical and stereotypical and helped me enjoy the game.  Now if you are not a fan of grindhouse movies, you may not enjoy that aspect of the game.

Gameplay is on rails, so you don't control the movement of your character this is done for you.  As enemies appear on screen you type the letter, word or phrase that appears around them and that acts like you are shooting them.  Objects that appear on screen can be collected by hitting the tab key.  This mode works well and while playing through it I didn't have too much of a problem except I am not a fast typist.  And that is when I did have a problem with this mode, it is fun but if you are not a fast typist are are going to die quickly.  My brother who was playing with me is a fast typist and thanks to him we were able to get through the stages with little trouble.

This version of the game includes the Playstation 3 version of the game that allows you to use a mouse or gamepad to shoot and this is where I really enjoyed the game.  Going through each level you still shoot enemies and collect items which unlock extras viewables but you also collect money.  This money is used to upgrade and purchase six different guns to help you through the game.  Guns vary from handguns, shotguns and machine guns and the upgrades effect everything from damage to ammo count.  The idea of buying and upgrading your weapons is a neat idea and it does work, however this also trivializes the game.  Having a fully upgraded machine gun and shotgun made the game very easy.  The game also lets you use grenades however I rarely ever used them.

On top to the story mode the game does have some mini games.  One has you shooting zombies while civilians wearing your color shirt are trying to escape.  Another has you fighting waves of enemies while trying to stay alive as long as possible.  The last one is a target shooting gallery that lets you try to get the highest score.  Overall these games are fun little diversions that while not important on there own, are a nice addition to the game package.

The game does support online multiplayer and when my brotehr and I ran through the game we had virtually no issues.  The only one that did come up was when we were on a boss battle and my brother all of a sudden could not see what was going on.  Once I finished the boss and the game went to a cut scene he was able to see again.  This only happened once and besides that we had a good experiecne with the game.  Unlike the single player mode which you have to unlock all the stages in order, multiplayers lets you play in any order you want.  Also the director's cut mode of the game is unlocked immediately instead of being unlocked in single player when you playthrough the whole game.  The Direrctror's Cut mode is basically the same game with slightly longer levels from what we saw and this is how we played the game.

Overall while I thought the typing mechanic of the game was alright, I really enjoyed the version of the game that let me shoot.  The story was presented in a visual way that made the game fun and the dialog between characters helps reinforce that.  Multiplayer was good and while not the same as standing next to someone with a light gun, it was still fun and enjoyable.  However if you are not a fan of grindhouse films the presentation of the game might turn you off.  Also if you are not a fan of on-rail shooter games this game does little to change your mind.