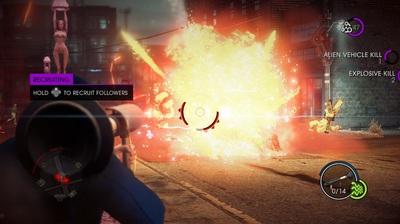 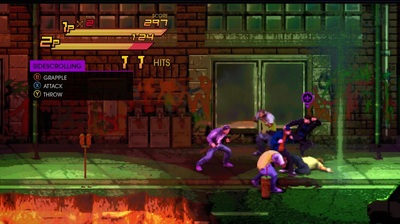 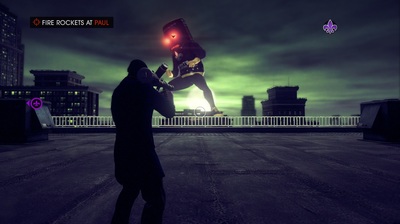 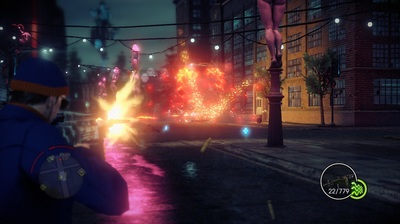 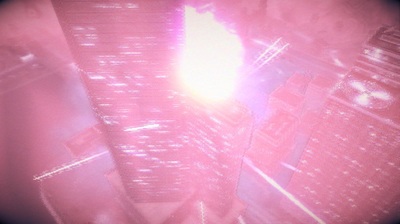 After playing Saints Row The Third I thought the series couldn't push its boundaries any farther.  The game had over the top action, a crazy story, humor that I enjoyed and a good presentation.  Saints Row the Third realized what it was and did it well.  And yet they somehow were able to out do themselves with Saints Row 4.  Although I think they might have made the game too easy in the process.

The game takes place a few years after Saints Row the Third and you, as the leader of the Saints, become president of the United States.  All of the major gang members from the third game become part of your presidental cabniet.  You then fight an alien invasion which results in you and your cabniet getting captured and the earth getting destroyed.  This leads to the main part of the game, where you are on a spaceship and must go into a simulation to rescue your friends and defeat Zinyak, the alien leader of the Zin empire.  Like I said, over the top story.  However, the Saint's Row series knows its over the top and that is what makes it work.

The game makes many references to pop culture events which I found to be a real highlight of the game.  The whole game mostly revolving around the Matrix idea was neat, along with other smaller jokes from movies like Ghostbusters and the Transformers.  And for me this was the best part of the game, I wanted to continue the story.  I found the story was littered with enough humor and references that the story never felt boring.  Also, the story revolves around your gang members and there pasts which if you played all the Saints Rows games it is neat to see these events again, abet slightly altered due to circumstances.

Gameplay is broken into three parts, mini games, the simulation and outside the simulation.  While you are in the simulation, you are fighting to take control of a recreation of Steelport from Saint's Row the Third.  While there you can purchase and upgrade your weapons, drive vehicles and use the games new super power abilities.  Your abilities range from super speed and jumping, blasting foes with elements, sending out a shockwave with your feat and a few others.  You unlock more abilites as you progress through the game and upgrade these abilities by finding data clusters that are scattered around the simulation.  Using these powers is fun and adds a new element to gameplay while retaining the over the top nature of the Saints Row games.  Occasionally you do other types of gameplay within the simulation, my favorite being a 2D brawler stage like Double Dragon.  These are far and few between, but do add some fun to the game.

While outside the simulation you are usually on your spaceship with other gang members that you have rescued from within the simulation.  This is also where you get most of the games missions, either the primary story ones or the side ones that unlock as you resuce your gang members.  While ouside the simulation you do not have access to your powers and your collection of weapons, usually using what is available or using a mechanical suit to fight Zinyak's army.  These parts of the game really push the story forward and without your super powers make the game feel more like Saints Row the Third.  While most of the game is played in the simulation, there are enough parts of the game outisde to make it not get over used.

Lastly while in the simulation you can also play mini games that are scattered around fictional Steelport much like they were in Saints Row The Third.  There are plenty of different mini games ranging from old favorites like insurance fraud and tank mayhem and include some new ones like virus uploading and super speed racing.  Also, there are non-mini game events like flashpoints where you fight a group of Zinyak soldiers or ones where you use your super jump to climb and take control of a tower.  You can do these mini games as you find them or as you unlock more side missions you are sent to these mini games which allows you to take over more of the simulation.  There are a good variety of mini games here and many can be repeated to get more money and experience.

Speaking of experience, virtually everything you do in the game gives you experience and most things give you money.  As you gain experience you level up which unlocks more player abilities that can be purchased.  Some abilities increase how much experience you get from missions while others increase how much ammo your weapons can hold.  This system is nice and certain upgrades you get latter on make the game go smoother.  There are also some over the top upgrades here as well, my favorite being when your max level if you do a super jump high enough in the air and target your landing you become a nuclear weapon.  This is as much fun as it sounds.

The game does suffer from some flaws.  The games addition of super powers, while fun, really does make the game too easy.  Abilities like super speed and super jump pretty much make using vehicles in the game useless.  Likewise, using abilities like super stomp trivialize many encounters.  Also, like the third game, you can eventually upgrade all of your weapons to have unlimited ammo and a effect, like exploding bullets which further diminishes the challenge of the game.    Also for the Co-op, there were a few times that when playing one of us would get disconnected, resulting in us having to redo a section.  This wasn't very frequent and besides that I had no problem with the online co-op.

Over and over again I have referenced Saints Row The Third and this was intentional.  Although this is its own game, it was supposed to be an expansion to the third game that evolved instead to what we have now.  If you played and enjoyed Saint's Row The Third, you will enjoy this game.  If you didn't enjoy the third game, you won't find anything here to change your mind.  If you never played a Saint's Row game before this isn't a bad place to start.  The story, characters and gameplay are good and retain the over the top feel that Saint's Row games have evolved into.  While I personally enjoyed the story more from the third one, this is a great continuation of the series.