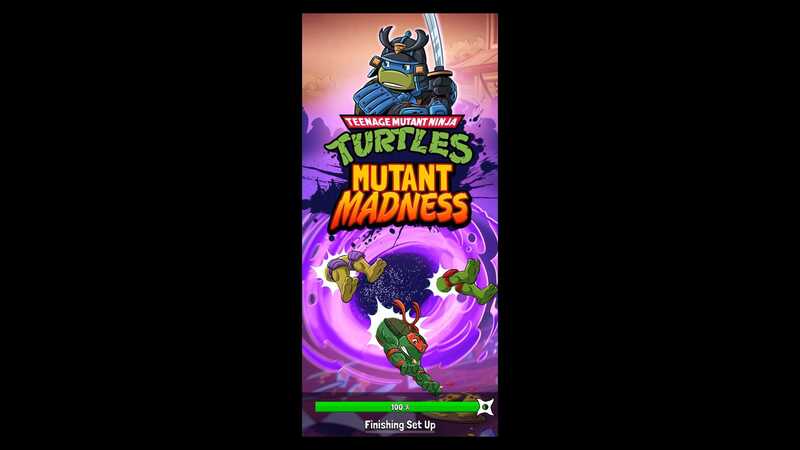 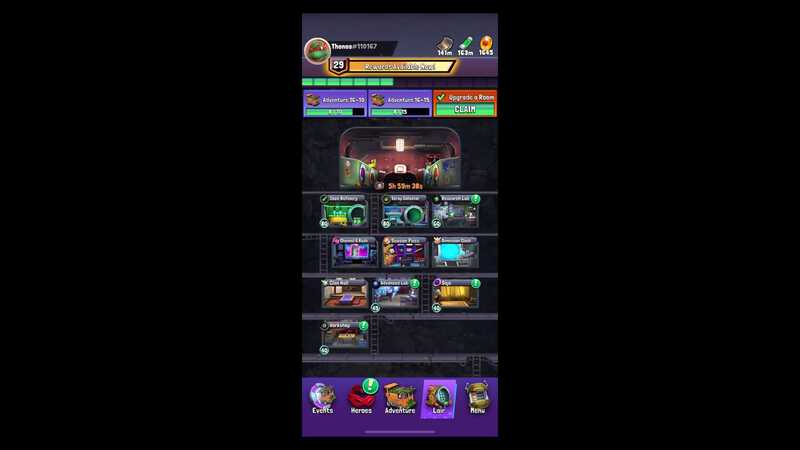 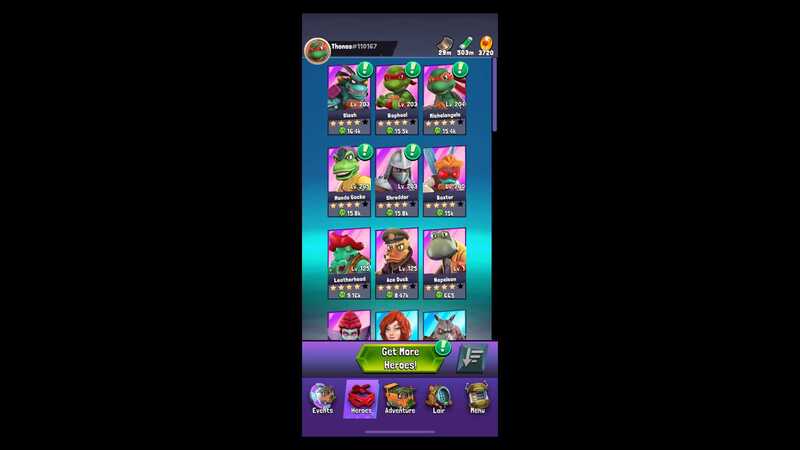 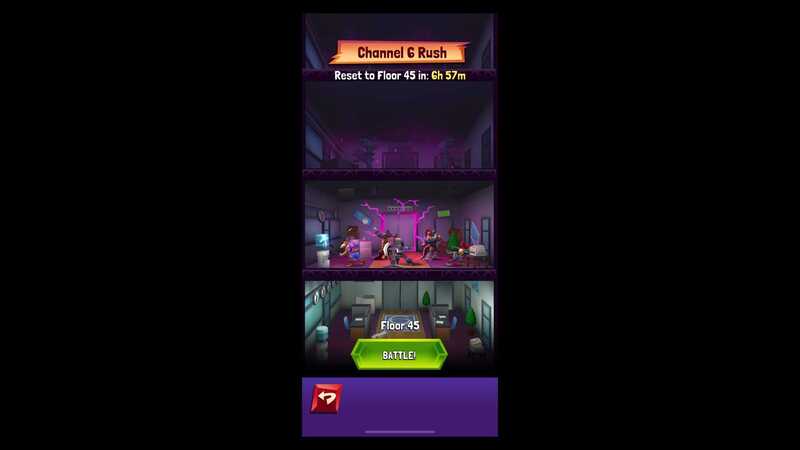 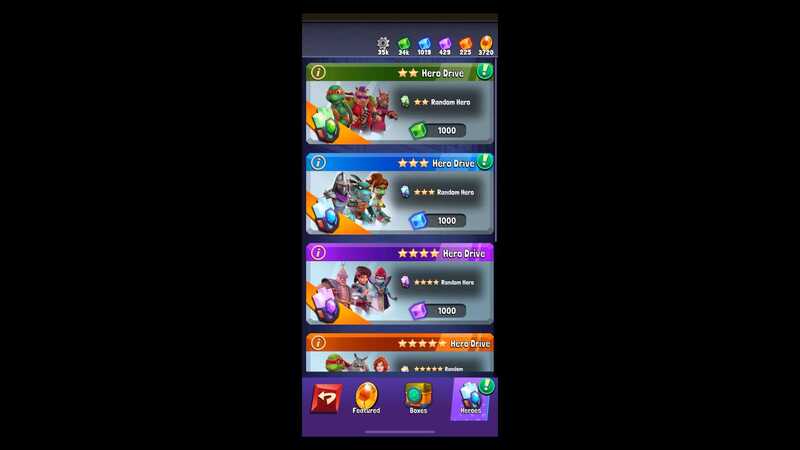 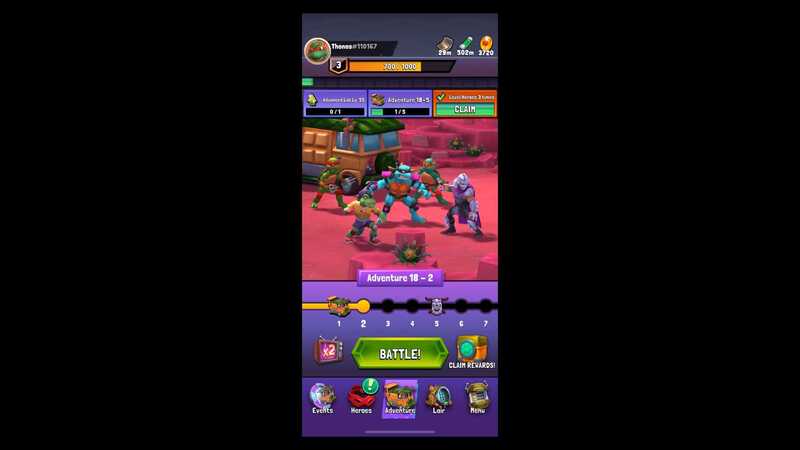 When I was growing up my brother and I were huge Teenage Mutant Ninja Turtles fans.  We watched the 80’s/90’s cartoon, the original live action movies and owned the action figures.  We were also big fans of the NES and SNES turtles games.  As we got older we stopped watching the newer cartoons and avoided the newer games.  When I came across this game I was excited since the game seemed to call back to the original cartoon as far as character design.  After putting some time into this game, I still come back to it everyday.

This is a squad based, idle RPG.  You form a squad of up to five characters from the Teenage Mutant Ninja Turtles (TMNT) universe, good and bad guys.  Each character has two roles that they do.  You face off against other five person teams throughout all the game modes.  Winning battles and stages gets you scrap, ooze, bits and gear, all of which will be discussed in more detail.  This is what the whole game revolves around with the different game modes giving out different rewards.

Besides fighting battles, you have your lair.  This is where the idle part of the game comes in.  You have rooms that will automatically produce resources for you at all times.  There are ooze, scrap, bits, and mod part rooms.  Ooze is what you use to level characters, scrap upgrades rooms, bits are what you use to get new characters and mod parts can be used to get gear.  There is also a room that just increases your overall team level ever so slightly every time you upgrade it.

These rooms can all be upgraded to produce resources at a much faster rate per hour.  These rooms all take scrap to upgrade which primarily comes from just waiting around for it to be produced.  You do get some from completing other game modes, but eventually you hit a point where most of it just comes from waiting for it.  The same applies for ooze.  The max level for a room is also tied to how far along you are in adventure mode.  Resources also cap out at twelve hours so it’s important to log in every few hours so you don’t lose out on resources.

The game currently has a few different things to do in it.  There is the adventure mode where you go from mission to mission defeating the next group of enemies thrown at you.  Every few missions you get a boss fight which usually just means one of the characters in the group your fighting is tougher.  At the end of each act you get a small comic strip that progresses the story.  One thing to note is that you can not go back and do previously beaten missions so grinding them out is not an option.  This game has no stamina system so you can keep progressing as much as you want/are able to.

There is also a PvP mode where you can fight up to ten times a day.  This mode is just like the adventure mode except you are fighting player teams who are computer controlled.  Winning matches increases your rank which pits you against stronger teams.  Channel 6 Rush is a never ending tower that has you fight tougher and tougher teams.  Whatever your top floor reached is the following day it will put you ten floors back.  So, if your max floor was 42, when the game does the daily reset it will put you back at floor 32.  This is the one part of the game that can be repeated everyday and is one way to get higher resources on a consistent basis.  There are also clan wars coming soon but they are not in the game just yet.  These are all accessed through your lair.

The game has a pretty decent roster of characters so far.  Almost every character that has been put into the game so far I remember from the original series or video games.  Each character has two roles such as tank, melee dps, ranged dps, support, ect.  Just like any RPG game you want to make sure you have a balanced team between all the roles.  Since there are two roles per character, it isn’t that hard to build a good team around your favorite characters.  They add new characters on a regular basis so if your favorite character isn’t in the game yet it probably will be eventually.

As mentioned above, you earn bits from doing content in the game and from your lair.  This is the primary way you get new characters.  Characters come in a two, three, four or five star rating.  Most characters are either going to be a two or three star when you get them the first time.  In order to pull new characters you need 1,000 of any particular bit.  Earning two star bits is very easy while three star bits come at a decent rate.  Four star bits are harder to come by but higher levels of the Channel 6 Rush do give out four star shards so they are farmable.  Five star bits are rare to come by but do give you the strongest star characters.

When doing pulls it is random who you are going to get.  Pulling a duplicate character of the same star level will increase the power of that character and give you twenty five bits of the next bit level.  So pulling a two star April when I already own one will increase my April’s power slightly and give me twenty five bits towards doing a three star pull.  With this system, even getting duplicate characters will help your team out.  Pulling a character with a higher star level than what you own will just upgrade that character's star level.  Every so often you will get an item that, when enough shards of a particular star level are earned, will give you that particular character with that star level, however these do not come around very often and really shouldn’t be relied on.

A character’s star power will determine its max level and overall max power level.  Ooze is still needed to level the characters up.  After a certain level is reached characters will learn new skills and others will be updated.  Gear can also be bought by using mod parts earned from your lair and also from progressing through the adventure mode.  One thing to remember is that a character's star level is more important than anything else so even if you max out a three star character level, a four star is still going to be stronger by a considerable margin even at a lower level.

The game has daily quests that besides giving you resources also give you credit towards season rewards.  Season are eight week stretches in the game that allow players that do daily quests to earn points towards unlocking a hundred different rewards that vary from premium currency, bits and even characters.  There are also smaller weekly events for spending ooze, scrap and winning PvP matches.  Each of these smaller events usually have milestones that when reached will reward you with resources.

This game has some microtransactions in it.  Besides buying different amounts of the premium currency, you can also sometimes buy character and booster packs outright with real money.  The premium currency is mostly used to buy tier boxes that besides giving you boosters and bits for character pulls will also give you a guaranteed character that is listed.  So if you want a guaranteed four star Michelangelo and a tier box has him listed, spending enough premium currency will get him for you.  There is also a premium battle pass that gets you extra rewards alongside the free ones.  I mentioned boosts and they are for getting large quantities of ooze and scrap at one shot.  While the game does offer microtransactions often, I never felt any of them where shoved at me.

The game looks good for a mobile game with the developer using more cartoon looking 3D models for the characters.  One reason I was drawn to the game was that it looks like they decided to use the characters' appearances from the original cartoon series.   While everything else looks good in the game, this part stuck out to me.  The game also sounds good with the music and sound effects.  The music is different but still similar to the music used on the 80’s cartoon which is another reason I like this game.

I have three issues with this game.  One, you are highly dependent on four star characters to really progress in the game.  Since those are usually random, it can take awhile to get a team you are happy with.  Secondly, there really isn’t a lot to do in the game after your dailies are done.  And lastly, while the game isn’t really pushy on the microtransactions, it's going to cost you especially if you want that four star character from a tier box.

This is a good game for what it is.  While it might be lacking content, it is an idle RPG game so some downtime is expected to gain resources.  The combat works just fine and the ability to speed up combat does come in handy.  The art design is what really drew me to this game and something I think they did a good job with.  The developer is putting out new content and working out bugs on a regular basis so I am hopeful for this game's future.  This is a game I play everyday, do all my dailies in it and plan to keep doing so for the foreseeable future.