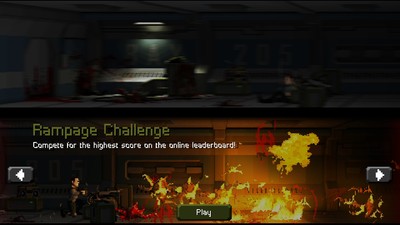 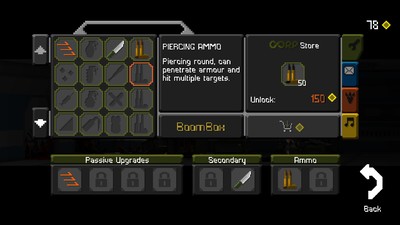 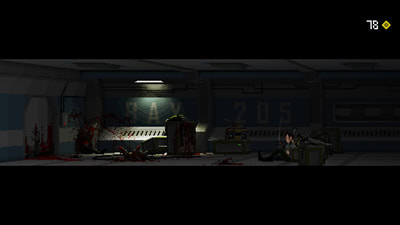 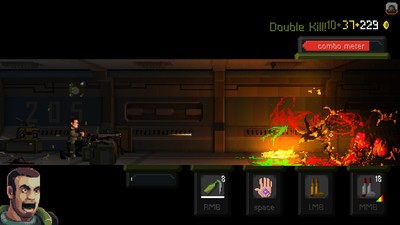 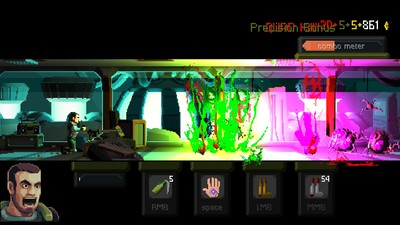 Now these are the games that, on paper, I enjoy.  The quick pick up and play for a short burst and move on type of games.  While they might not be as impressive as an RPG or as in depth as a fighting game, they provide just enough fun for a short play window.  Let Them Come is one of these types of games. A game that was designed to play quickly and not overly punish you.

The story in Let Them Come is that you are the sole survivor aboard a spaceship that is infested with creatures.  Your goal is to make it to the command center of the ship. And that is pretty much the story. As you progress through the game you do unlock pieces of information about the creatures you are fighting and how things got like they did on the ship.  The story takes a backseat in this game, just know that it is there if you want to read about it.

The gameplay boils down to you shooting everything that comes at you.  You start off with your mini-gun and its unlimited ammo. Enemies come at you in waves, killing all the enemies clears the wave and starts the next one.  This continues until you reach the boss or you die. When you die, you go to an intermission screen before you restart the last wave you were on.

When at the intermission screen you can buy new items using points you earned from killing enemies.  These items range from modifications to your mini-gun, throw able weapons, different ammo types and melee weapons.  You can have up to four modifications equipped at a time, two different ammo types and one of each throw able and melee attack.  As you progress through the game all of the thirty two items become unlocked and the mini-gun modifications and melee weapons can be upgraded three times.  There are plenty of options for you to mess around with and find a combination to fit your playstyle.

While you are killing enemies are sometimes earning combo kills that fill up a combo meter.  When this meter is full you get to pick one of three perks. These can include more points, temporary assists and a resupply for your ammo and throw able weapons.  Once you select a perk, another bar fills up and the closer you stop it to the top the longer the perk lasts or you get a bigger bonus. This is a great mechanic that while a little random, can drastically change your situation.  I particularly liked getting the resupply perk since this saved me from having to buy more ammo and throw able weapons.

The main mode of the game has you fighting through 125 waves of enemies with a boss battle every twenty five waves.  Once you beat the campaign, there is a new game plus option with harder enemies, but you start with everything you previously purchased.  There is a boss mode where you get 3000 points to spend however you want and a rampage (survival) mode where you get 4000 points to start.  There is also a Twitch mode, which I did not try. Overall you have some options here.

The game uses a pixelated art style which I really liked.  You take that with the lighting effects, the explosions and enemy design and everything looks good.  The sound effects were also well done, but I have to mention the music. This game has a great soundtrack and one feature I liked was that as you progress through the game you unlock more music and can even build your own playlist with this music.   You may not like the music due to your own personal tastes, but you have to still say it was well done.

While I enjoyed the game and the two and a half hours it took me to beat it, there were some issues.  First off, while you have a good amount of customization options, some situations almost require a certain setup.  This is not a problem if you know about it ahead of time, but sometimes you burn all your points and then realize you messed up.  Also, certain perks seem too powerful given the right setup. Lastly, I did not find the game that hard. The game was more trial and error than skill for me.

Overall, I had a lot of fun with this game.  While not the hardest game I ever played, there is enough here to keep things interesting.  The graphics and audio are very well done and the gameplay is solid. Definitely a game I will play again if nothing else just to see how high I can get my score.