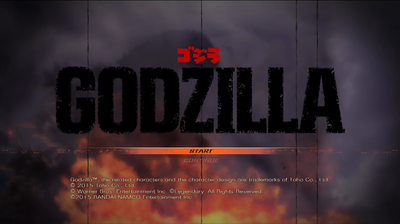 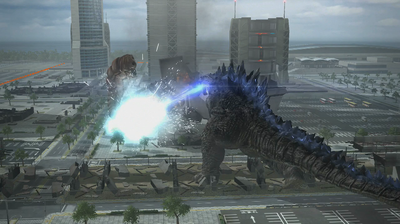 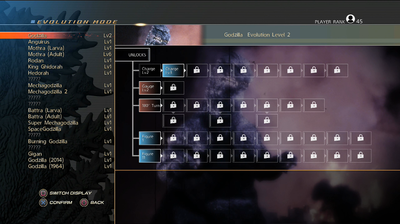 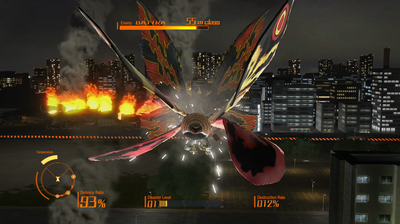 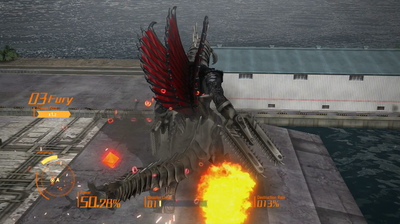 For someone you enjoys Sci-Fi movies, I never saw many of the older Godzilla movies.  The few that I did see I liked for what they were, I just never got around to watching all of them.  I saw that they made a game based off of the Godzilla franchise and at first I was hesitant.  I'm all for mindless games of grinding and destruction but my concern was if there was going to be enough variety here to keep me interested.  The answer I came to was "sort of".

The back story of Godzilla is pretty well known by now.  It varies depending what description you look at but it almost always has to deal with either a sea creature mutating due to radioactive energy or a huge sea creature awakening due to radioactive energy.  Godzilla then comes to shore destroying everything in its path looking for food, which in this case is energy.  This is pretty much how this game plays out as well.  You are looking for food, which mainly comes from destroying generators on each of the games stages.

The main game mode here is God of Destruction.  In this mode you play as Godzilla and as stated above, you go around the stage and destroy generators for food.  Well, destroying anything counts as food, but generators give the most and are the objective of most stages.  The more food you consume, the bigger Godzilla gets.  On almost every stage at a certain point besides the military attacking you, another Kaiju (monster) will show up and attack you.  This includes pretty much all the monsters from the Japanese Kaiju movies from Mothra to Rodan.  If the enemy Kaiju shows up before you destroy all the generators, you will also have to beat the Kaiju to finish the stage.

The game play progression for God of Destruction mode is pretty straightforward.  After you complete the tutorial and first stage you are shown a map of the rest of the stages.  You are usually given a choice between two stages, one being harder than the other.  The harder the stage the tougher the enemies and the monsters can sometimes be much stronger than you.  Eventually once you get far enough down the map if you are strong enough (which means if you consumed enough food to grow big enough), you will unlock the final stage on the map.

The controls took a little getting used to but after some time with them I got used to it.  Combat revolves around a basic attack, a strong attack, a charge attack and a ranged attack.  You also have a roar which acts like a guard and an evasion move which can be used when your charge bar is full.  Movement here is different from most games since while you move with the left thumb stick, you turn with the L1 and R1 buttons.  This is awkward at first, but once I got used to it turning was second nature.

As you play through God of Destruction mode as Godzilla and fight other Kaiju, defeating them gives you 1-3 cells of there power.  You use these cells in the game's Evolution mode.  In this mode you can power up how fast Godzilla's temperature gauge refills which affects how often he can do a range or evasion attack.  You also can increase you gauge bar and affect you basic attacks.  Upgrading requires cells from defeated Kaiju and energy you consume from playing through God of Destruction mode.  These are accumulative over all of your play sessions so grinding is going to be needed to unlock everything.

Besides God of Destruction and Evolution mode, you have King of Kaiju mode in which you fight one on one with other Kaiju.  There is a Diorama mode where you can pick a backdrop, drop in figures of the games Kaiju and take pictures of scenes that you create.  You unlock figures for each Kaiju in Evolution mode.  There is also a Kaiju guide that describes what seems to be every Kaiju that was ever in a Godzilla movie.  It provides information about the Kaiju and it's movie appearances.  While King of Kaiju and Diorama modes, to me, felt underwhelming, I enjoyed reading about all of these Japanese movie monsters that I never heard of.  There is also a VS mode that lets you fight online with up to two other players which I did not try out for this review.

When I see a game like this, I go into them not expecting top notch graphics.  What I got was decent looking character models that did a good job depicting all of the games Kaiju.  The stage designs looked decent, nothing amazing though.  The games audio was also decent, from the Kaiju sounds, the explosions and the music.  One thing to remember is is going into the game with realistic expectations.  I went into the game expecting to walk around and destroy things.  With that mindset in mind, I am happy with how the game looks.  If graphics are a huge priority for you, this game may disappoint you.

This game has a few flaws with it.  First is that there is little to no variation in each stage strategy.  Each stage play out almost exactly the same way.  The materials for evolution upgrades can take awhile to get and on some stages it it possible to see different Kaiju on different play sessions so planning out a grinding strategy can be difficult.  Also when on the normal and hard difficulties you may run into a fully powered Kaiju which if this happens early on into your run it can make it very difficult to move forward.    All in all the biggest issue boils down to a lack of content outside of the God of Destruction mode.  And while I have no problem playing grind-heavy games, I only found this one fun for a few hours, after that I started to get bored quickly.