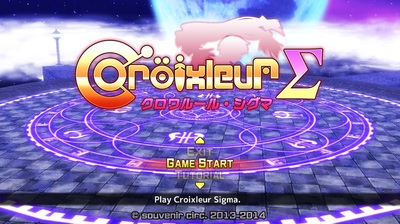 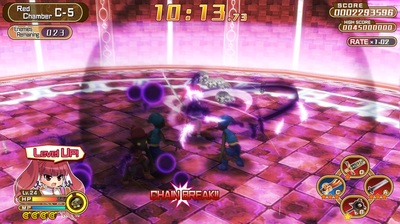 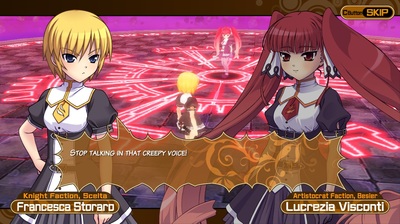 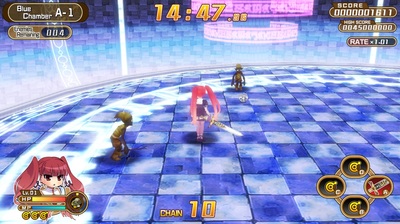 ​Knowing what type of games that you enjoy and taking chances with unknown games can work for you and sometimes against you.  Croixleur Sigma is one of those games that I look at the description, look at the graphics, look at the price and say to myself, "What the hell, I'll try this out".  While I was happy with my purchase, I wish there was more to the game.

The game takes place in the land of Ilance and revolves around the Adjuvant Trial.  The trial involves a member from the Knight and Aristocrat factions fighting through a tower filled of enemies and whoever makes it to the top first wins.  The faction that wins then has military and political authority over the land and are charged with protecting the Queen.  Lucrezia Visconti, the stern, on a mission character, represents the Knight faction while Francesca Storaro, the carefree character, represents the Aristocrats.  The two main characters are shown to know each other and while they are on different sides, they seem to be friends.

The main story mode has you battling through a tower where the only way to advance is to clear all the enemies on the floor.  A portal opens up letting you advance and while sometimes there is only one portal, other times you get two so you get the illusion that you have a choice.  You eventually end up on a boss floor which when cleared opens the next floor and starts the process over again.  Out of 23 rooms in the story mode, you only go through 16 of them during any given playthough.    Overall you have fifteen minutes to get to the final boss which I found to be plenty of time.  If you beat it fast enough you fight whichever character you did not pick and that gets you the good ending.  I found the story to be pretty shallow and unimportant.

Combat revolves you running around and attacking your enemies using swords that you collect while fighting though the tower.  Each sword has a special ability that can be used as long as you don't run out of mana.  You can take four swords with you so you get some choices on what you want to take once you unlock each of the ten swords for each character.  These special attacks from the swords can be chained together so depending on your play style you can get a format that works for you.  You also get an invinicble spin attack that does some decent damage, but you only get three to start with and as you level up your weapon you get more uses of it.  I found the combat to be good and a strong point to the game.  The only thing I wish they had was a lock on target button.

Besides story mode, you get a Score attack mode, Survival mode and Challenge mode.  Score Attack mode gives you 3 minutes to see how high of a score you can get while Survival mode is the same except you keep going until you die.  Challenge mode gives you 10 increasingly harder challenges for you to do.  All of these modes can be done with either character and with any unlocked weapon.  The problem with all this is that unless you are trying to unlock all of the achievements or you just really enjoy the game there is no reason to do these modes.

I found the game to have good sounds effects and music.  The Japanese voice acting is alright, but there is so little of it in the game that I found it not that important.  The game looks alright as well, most of the enemies look decent though I felt the bigger boss enemies looked less detailed.  Most of the enemies that you fight look the same with different colors and different attack animations.  The way combat works in this game you are going to be killing the enemies so quick that you won't have much time to pay attention.  The stage looks average at best, you get to fight on the same looking stage through the whole game with a color change here and there.

My biggest complaints about the game are the length of the story mode and the ease of the game.  The story mode has a fifteen minute timer so if you don't beat the game by then you lose.  Sure, you can go and try to beat the game faster and go for some hard achievements but at the end once you see the ending the rest is just filler.  Also, if you die during the story mode you can just pickup where you left off with only your score being reset.  To me, unless I am going for a particular achievement or the highest score, this kills the challege to the game.

Croixleur Sigma is not a bad game but it is a short game.  I found the combat to be fast and fun.  There is some content to do after the main story, however its relavance is dependant on if you are into unlocking more achievements.  The short story, to me is a drawback since beating the game in under fifteen minutes is fairly easy.  Still, I found the game to be fun to play in short 20-30 minute bursts.  This is a great example of it you know what you are buying and understand what is included, you will enjoy your purchase.

Two player mode is unlocked after you unlock the other playable character in the game and was not tested for this review.