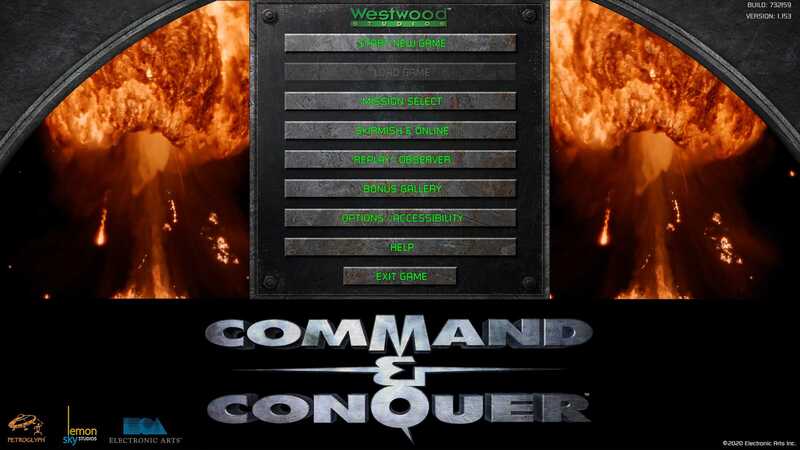 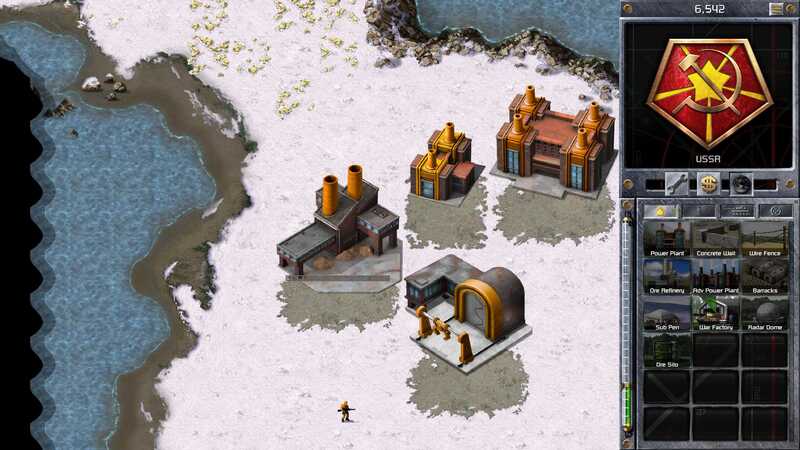 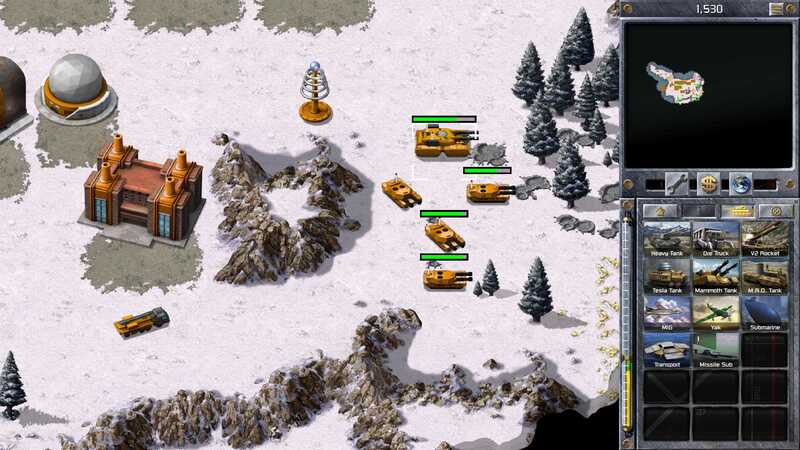 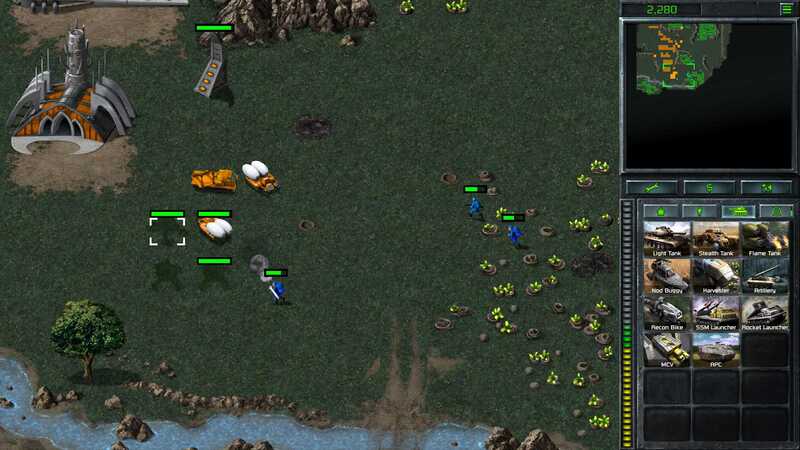 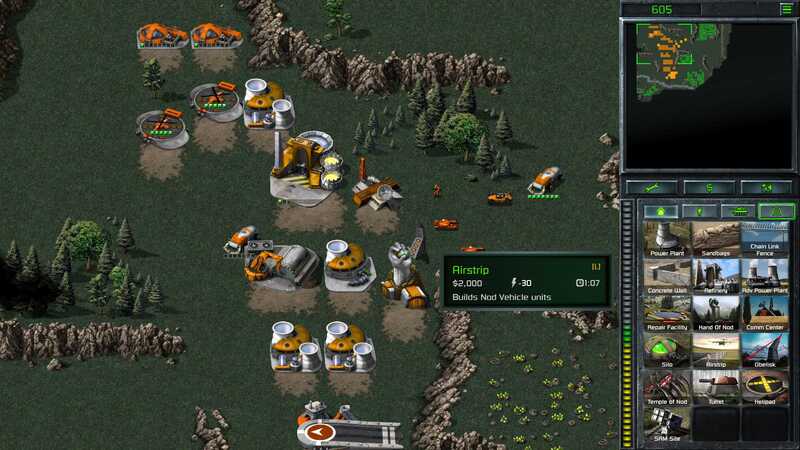 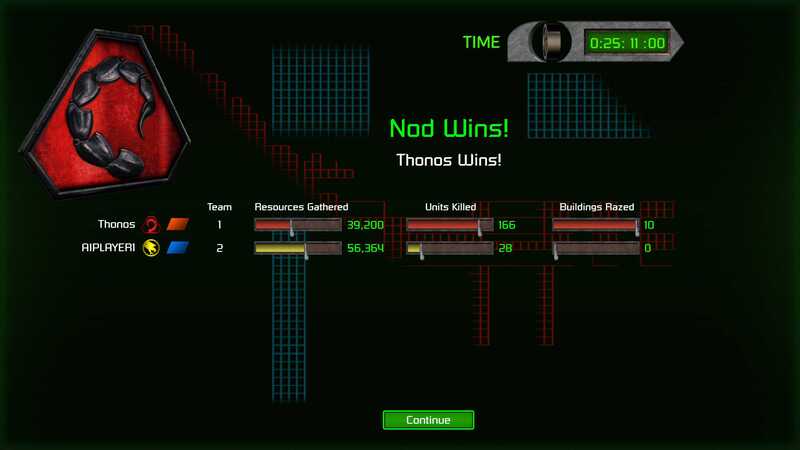 The original Command and Conquer takes place in the near future and involves two sides, The Global Defense Initiative (GDI) and the Brotherhood of Nod.  Red Alert portrays an alternate reality take on World War II by having the Allies vs the Soviets.  Fundamentally, both games have the same story with the good guys vs the bad guys.  Each game has you pick a side and go through a campaign mode with FMV cutscenes between each mission.  These cutscenes are almost as noteworthy as the games themselves.  One thing this collection does is add not just the expansions for these games, but also the missions that were only available on the console versions.

The core gameplay has not changed from the original games.  You build a base, gather resources (Tiberium in the original, Ore in Red Alert),  build an army and destroy your opponent.  While doing the campaign mode you may have a limited unit build selection based on the mission, but usually it is your choice to use that build selection to defeat your enemy.  You can send in fifty infantry, ten tanks or a combination of anything at your disposal.   The only limit you have is how many resources are available on the map to collect.  Each faction in both games are fairly balanced, but have their strengths and weaknesses. Beating a mission brings up a summary screen and takes you back to the campaign map to select your next mission.

The graphic overhaul cannot be understated here.  Both games look great and have a modern appearance to them while retaining the look of the units and structures.  They even added an option while playing solo to go back and forth between the old and new graphics.  The FMVs have been upgraded and look better than ever.  I feel the overall presentation of both games is very well done.

The sound has also been redone.  The music has all been redone by the original composer and it sounds great.  They even got the original voice actor who did the computer voice in Command and Conquer to come back and redo her lines.  There is even an option to customize the in game music to play whatever music tracks from Command and Conquer and Red Alert you want.  Like the graphics, the sound was well done.

Besides graphics and sound, the game does add other quality of life improvements to make it more modern.  The ability for unit queuing and being able to right click move units are the two biggest ones that come to mind.  The ability to zoom out also is a nice improvement and that bigger view of the battlefield does come in handy.  Along with a map editor they added mod support which are excellent ways to extend the life of a game.  While not every improvement in the game is massive, you can tell they tried to modernize these games as much as possible.

The biggest addition the remastered collection brings, for me at least, is a skirmish mode for the original Command and Conquer.  This is the game mode I plan on playing the most and so far I am having fun with it.  The game does have an ELO matchmaking multiplayer system, but I am not going to be giving it a try.  I like these games, but I’m not the best or most efficient at them.

The game has two issues that bother me.  One is that there is sometimes screen lag when giving unit orders and movement.  It doesn't happen all the time, but it happens enough that I found it to be really annoying.  Apparently, as of the time of this review, the developer is aware of this issue and is working on a patch for it.  Also, I understand trying to remain faithful to the original game and how it's played.  With that said, the AI and pathfinding of the units is pretty bad and I would have hoped they would have made some improvements in this area of the game.

If you are like me and grew up with these games, this remastered collection is a must buy.  They took what was good with these games, enhanced it, modernized it and added enough content to make these the definitive versions of these games.  If you are on the fence about this, these games are legends in the RTS genre and if you never played them this is a great time to jump in.  If you never liked the franchise from the beginning, even a fresh coat of paint and modernization is going to change your mind.