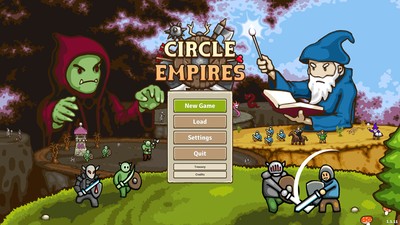 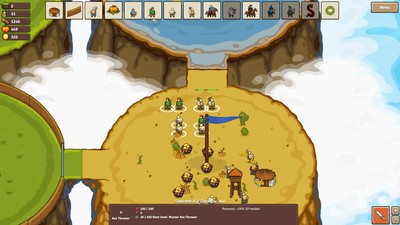 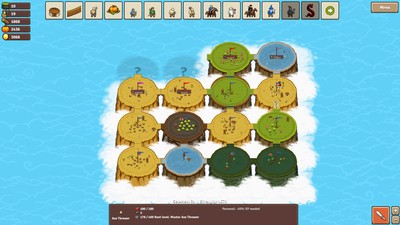 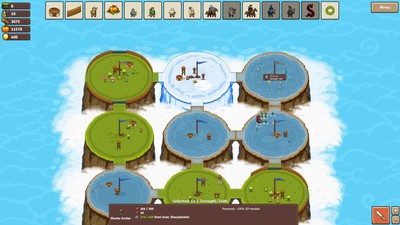 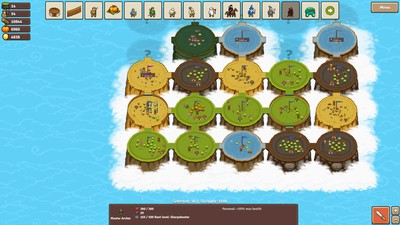 Along with turn based strategy, real time strategy games are some of my favorite games to play.  It’s not about who has the fastest reflexes, it’s all about planning and executing. While some RTS games have some complexity to them, others just want you to play and have fun.  That is where Circle Empires comes in, a simple RTS game with the basic mechanics. While it does have a few unique ideas, it keeps things pretty simple.

This is a pretty straight forward RTS game.  You start off with one circle and a worker, collect resources, build defenses, build an army, attack and take over other circles.  You have wood, food and gold as your resources and while food and wood nodes will respawn over time, you can build a bank that will constantly make gold.  As far as I could tell there is no population limit, at least one I never reached. Nothing special here, just normal mechanics for an RTS game.

Like everything else in the game, combat is straightforward.  While each of the games eighteen leaders has their pros and cons, they all mostly use the same unit pool.  There are some differences, mostly when it comes to which monsters they can make. Created units get dropped where you place them so if you are being attacked and have the resources you can easily create a defense for yourself.  All units gain experience and upgrades can be purchased to increase and reduce damage to all units. Overall, I found the combat to be quick and satisfying.

The game has six difficulty levels which makes the A.I. stronger and more aggressive.  For me, The first three difficulties were not a challenge. Depending on the game mode Extreme difficulty started to put up a challenge, but the mostly Nightmare difficulty provided a decent challenge in all modes.  Even on the higher difficulties playing a small map still wasn’t overwhelming, it was when you get into the twenty five and forty nine circle maps that if you don’t plan ahead you can run into problems. Still, if you are a master of RTS games, even the highest difficulty might not be a problem for you.

The game does have a decent amount of unlockable content.  Mostly this happens from winning maps with certain lords, beating maps on certain difficulties and just naturally playing game modes.  The unlockables give you higher difficulties, bigger map sizes, new monsters to hunt in Monster Hunt mode and most importantly new leaders to play as.  The leaders all have their bonuses and units they can summon and with eighteen of them to unlock, there is some variety there. While most of the unlockables are just basic items, it is still nice to have something to strive for.

I really enjoyed the art style of the game.  While not everyone is going to be a fan of the sprite graphics and simple backgrounds, I felt they helped enhanced the game’s simplified combat.  Same goes for the audio, simple and effective. I did enjoy having an audio and visual cue when one of your circles was under attack.

One issue I noticed was that when you load a saved game, the A.I. would just start attacking me.  This wouldn’t happen every time I loaded a saved game, but it happened enough that I felt like I should mention it.  Also, most of the games I played revolved around me building up resources until I was able to make the most powerful units and just swarming the enemy.  The power rating on each circle is also misleading, I often defeated enemy circles that were stronger than me by just using a combination of towers positioned on their border and stronger units.  Overall, I did not find anything incredibly game breaking.

While not nearly complex as other RTS game, Circle Empires was a fun way to waste time.  With unlockables, multiple game modes and leaders to play as, there is a decent amount of replayability here.  However, minor issues and a lack of multiplayer might be a turn off for some players. For players who prefer a solo experience or a less complex RTS, there is enough here to keep you coming back.