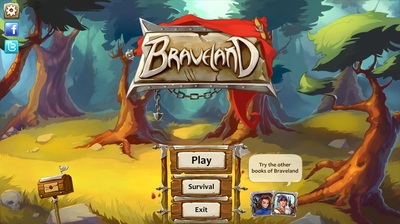 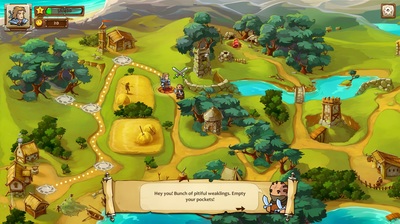 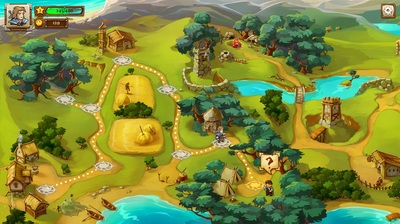 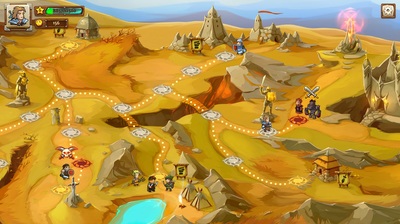 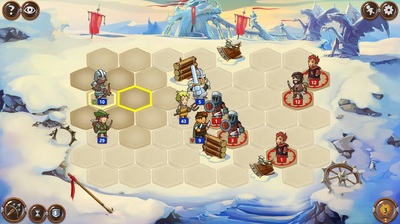 Review
by Thonos
1/22/2016
​
Mobile games that go over to other platforms can be hit or miss.  While some can transcend the stigma of being a mobile game, others just look like bad ports for a cash grab.  I found Braveland to do a decent trasition to the PC but it is still very obvious this was a moblie game.

The game starts with your village being attacked and you, the hero, wanting revenge on the bandits who did it.  As you progress you gain troops that will join your ranks.  As you progress you can recruit different types of troops like archers, clerics and knights.  There is an army point system, each type of troop counts for a certain amount of points and you are only allowed so many points in your army.  What this boils down to is that you can not have all the different troop types in your army at the same time.  So you have to choose do you want more range units or more melee, a small tough army or a larger weaker one.  One thing to note is that the point system only effects the type of unit, not how many of each type you have.  Having 1 archer or 50 counts for the same amount of army points.

Combat is done on a battle map that lets you move your troops on the map in a turn based fashion.  When I say troops, I mean that, for example, all the knights are in one group and that you attack as one unit.  The goal of each battle is to eliminate all of the enemy troops in each battle.  Almost all of your troops have a special ability that can be used and has a cooldown (ex, clerics and heal other units).  As the battle progresses you gain fury points which lets you use magic abilities like haste, shield, fire arrow, ect.  In this regard the game is very simialr to Heroes of Might and Magic combat and I found to be a strong point of the game.

The game uses hand-drawn, cartoon looking graphics that I feel look great for the game.  It fits in with the simple gameplay.  The games sound effects and music follow the same pattern.  The overworld map and battle maps look good as well.  From a presentation standpoint I liked the game, but those looking for more realistic graphics will not find them here.

I found the game to be very linear in its progression.  The map usually only gives you one path to follow, when it does branch it is usually to get an item, a new spell or more troops. Also, you are limited to how many of each troop type you can have based on your level.  While that is not a big deal, I would have liked to recruit as many of each troop type as I could afford and not be locked behind a progression gate.  Also, the story is alright but nothing great.

The game supports three levels of difficulty and while there is a noticeable difference on each level, I didn't find it to affect the story at all.  On top of the story mode there is a survival mode where you start with a set amount of funds and as you battle you get more funds to purchase more troops while fighting harder battles.  This is another shortcoming of the game in my opinion, once you beat the game there is no reason to come back to it.  Sure, the survival mode is nice but it is short and does not add anything to the overall game.

Braveland does a good job of emulating the Heroes of Might and Magic formula while simplifying it.  This is a good game if you want to focus more on the battles and not the city building.  Just note that once you beat the story mode there really is not much else to do afterwards.